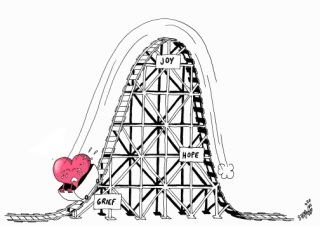 Since this weekend I’ve felt kind of lost and lonely. Disillusionment is upsetting. Devaluation doesn’t just suck for the other person; the non-Borderline. It sucks for the Borderline too. One day you get those little butterflies in your stomach, your heart pounds and you can’t help but smile. The next is only emptiness. The person doesn’t even look the same to you. Where they used to have a certain glow, now they just have 3 day old stubble. The bounce that lightens your step is gone, gravity feels a little stronger. I don’t want this to happen. Losing all of that is upsetting to us too. It’s like losing the sun and trading it for a year of night (Ok, maybe not my best analogy considering I prefer the darkness, but you know what I mean).
I’m weary. Very weary. I’m wearing different skin again. This skin belongs to someone sitting 15 feet back from everyone around her. I don’t belong here. I thought I might, but I don’t.
A Reader made a comment to me the other day. I said I couldn’t trust myself. She thinks I can: What is important is how you feel with him and how you perceive him. That is your truth and you can trust it. Trusting yourself doesn’t mean you get things right all the time it just means you honor yourself and what you need.
I love this sentiment. I think it’s beautiful.
The problem with being Borderline is the way I feel around him changes constantly. Especially now that I’ve had my rosey colored glasses unceremoniously knocked off of my face. When he’s not around, it’s as if he’s not even in my life so I can view everything objectively. I can look at the reality of the situation, analyze and annotate my notes on the whole thing and come to a very rational conclusion…. But when he’s with me everything changes. I feel his solid presence and his desire to be in my company. A tangible proof that I’m not alone and might not always be alone in the world.
Another problem with Borderline Personality Disorder is how we can’t help but base our opinions on the last interaction. Saturday by the time we left the casino I was weary, exhausted, and felt  like there was a physical wall between us. I saw him on Monday and he was sweet, flirty, and giving me the attention I wanted so I was conflicted about ending things completely. Maybe he just gave the wrong impression, maybe this, maybe that…. I doubt. We texted that night and he said some sweet things and I felt that glow and was happy with him. A few moments later he said something that I found to be heavy handed and disheartening… I was done talking to him after that. I haven’t seen him yet today, and I don’t want to.
This is a lot of why I feel I can’t trust myself. My feelings change moment to moment depending on how I last perceived them.
The important thing here is that my eyes opened before I began to fall for him. That’s what has tripped me up so horribly in the past. When I idealize someone so much, to the point where I am absolutely in love with them, nothing can stop my feelings for them. If atrocious and horrible things happen after I’ve fallen in love, I’m likely to put up with way too much abuse. My emotional rollercoaster will be compoundingly devastating because logically I know this is bad for me, but it is in extreme opposition to what my heart now wants. The contradiction is maddening.

If someone has done something ‘off’ enough that they’ve lost their value in my eyes, before I become attached, then this is not the same problem. My ability to invest in them emotionally becomes null. A cast iron gate has dropped along the road to a broken down town. From far away it still has a quaint appearance, but I’ll never get close enough to bother buying realty. I may stick around for a while, but only until I find something better.
This makes me wonder. Perhaps a new Borderline hypothesis.
How to determine if a relationship with a Borderline will last long or not: If things go so well that we idealize someone long enough to fall in love with them, then nothing will deter our emotions (this doesn’t mean we won’t still second guess things, push away-pull back, etc, but we’ll probably stay or keep coming back). However if someone we’re interested in has been devalued before we can form a deep emotional attachment to them, it’s easier for us to deconstruct everything immediately and perhaps walk away. Doesn’t mean there won’t be some strong emotional conflict, but it won’t have the chance to reach a point where our worlds will end if it isn’t forever.

Which makes me consider my next thought. The best thing for a Borderline who is trying to get over a past heartache is to cut off contact completely (I feel compelled to say, at least until we’ve fully moved on to someone else). No texts, no e-mails, no going out for coffee, nothing. The few times I’ve remained in contact with men that have broken my heart, The One and Friend namely, it’s taken me so, so much longer to get over them (if I can truly say that I have). It always feels like there might be some chance, or there’s too many opportunities to read too much into their words, too many times that hope can be rekindled, sparked for even a moment. Too many times for the last interaction to be positive and subsequently negative, and break our hearts all over again. But with say, Evil-Ex, even though we continued living together, we avoided each other completely, never spoke, and I moved on very rapidly. I’ve never, not once, ever considered going back to him or wanted him in my life in any way ever, ever again. We did have to talk occasionally by the nature of dealing with living arrangements, however by that point his mask had slipped so thoroughly that he could no longer sweet talk me which rapidly made him lash out and increase the rift of my devaluation. My point, time, space, and distance are the best things we could do for ourselves to get out of these situations.
I still have conflicting feelings about Friend. I haven’t spoken to The One in probably 7 or 8 years, yet he still haunts my dreams. Evil-Ex pops up in them occasionally too, but that’s never a matter of consequence so much as amusement. Even my subconscious sees them differently.
Don’t think this is just about Tech Boy. This is practically every ‘relationship’, ‘thing’, whatever, that I’ve had.
Bloody Fucking Hell. Seriously. So Tech Boy just stopped by my office. He asked me if I was coming down to break in a bit. I wasn’t planning on it, but I said it depended on how hard it was raining. So what’s he do? He offers me his jacket to keep me dry. ::head desk::
::sigh::

5 comments on “Borderline Devaulation Sucks for Us Too”