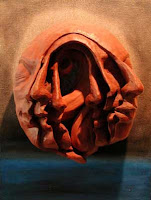 Some of this information is a bit repeat-o from things I’ve mentioned previously, but I feel it’s important to provide the findings of various experts on the subject of BPD as it is all relevant and useful. So continuing on with the theories of John G. Gunderson M.D….
Psychological Factors
Like most other mental illnesses, Borderline Personality Disorder does not appear to originate during a specific, discrete phase of development. Recent studies have suggested that pre-borderline children fail to learn accurate ways to identify feelings or to accurately attribute motives in themselves and others (often called failures of “mentalization”). Such children fail to develop basic mental capacities that constitute a stable sense of self and make themselves or others understandable or predictable.
One important theory has emphasized the critical role of an invalidating environment. This occurs when a child is led to believe that his or her feelings, thoughts and perceptions are not real or do not matter. About 70% of people with BPD report a history of physical and/or sexual abuse. Childhood traumas may contribute to symptoms such as alienation, the desperate search for protective relationships, and the eruption of intense feelings that characterize BPD. Still, since relatively few people who are physically or sexually abused develop the borderline disorder (or any other psychiatric disorder), it is essential to consider temperamental disposition. Since BPD can develop without such experiences, these traumas are not sufficient or enough by themselves to explain the illness. Still, sexual or other abuse can be the “ultimate” invalidating environment. Indeed, when the abuser is a caretaker, the child may need to engage in splitting (denying feelings of hatred and revulsion in order to preserve the idea of being loved). Approximately 30% of people with BPD have experienced early parental loss or prolonged separation from t heir parents, experiences believed to contribute to the Borderline patient’s fears of abandonment.
People with BPD frequently report feeling neglected during their childhood. Sometimes the sources for this sense of neglect are not obvious and might be due toa  sense of not being sufficiently understood. Patients often report feeling alienated or disconnected from their families. Often they attribute the difficulties in communication to their parents. However, the BPD individual’s impaired ability to describe and communicate feelings or needs, or resistance to self-disclosure may be a significant cause of the feelings of neglect and alienation.
Persons who have been adopted are statistically more likely to develop BPD than the general population. Adopted children often fantasize that their “real” biological parents could have and would have protected them from the frustrations and hurts they have experienced. Indeed, the hope and belief that if only such idealized and nurturing caregivers could be found, then life’s problems would be solved, is central to what BPD patients (whether adopted or not) pursue in relationships with others.
I can NOT attest to physical or sexual abuse when I was a child. But as mentioned in this post I have very strong, distinct memories of having my feelings and accomplishments invalidated. Also the ‘traumatic’ experience of thinking my mother abandoned me when she was in the hospital giving birth to my brother. For many years following this though, I didn’t see my mother much. My parents believed that one of them should ALWAYS be home with us so my dad worked days, and my mom worked nights. Subsequently when my mom was home, she’d be asleep, and when she would wake up it would then be time for me to go to bed. So I didn’t get to see her very much until high school and I had a greater attachment to my father, who was not the most adept with an emotionally challenged daughter. I was often expected to respond like a boy would respond; no emotions, no crying, suck it up, deal. With my mom so often being absent during my weekdays, I didn’t really have a chance to learn to express or deal with my emotions properly. I felt the need to suppress part of myself, couldn’t relate to myself, or my dad. I definitely don’t think he understood what I needed. Hell, I still don’t think he understands what I need emotionally, but I’ve since given up trying.
My problems with this may have started with my parents, but they relationships and friendships I developed when I became older certainly did not help. My splitting developed in much stronger ways once I was older. Probably starting around the time I was 13, and amplifying steadily through high school and especially over the last few years.
I’m intrigued by the adoption theory. I can easily see how this would manifest in adopted children. Especially when I was a teenager I used to WISH that I was adopted. I had these same fantasies that I might be adopted and my real parents might actually understand me, might actually care enough to fix me, could actually save me from myself. Of course this wasn’t the case. I’m not adopted. What’s more? I actively refused help and pushed away anyone prohibiting the possibility that someone might understand me.
It’s odd writing about this some days. I have these very clear memories, but writing them down, writing about them, seems so clinical. Like it wasn’t me that went through this, I just watched someone else that looked like me go through it all.  Recording objectively.
Continuing on with Dr. Linehan’s theory I’ll take a look at Vulnerability vs. Invalidation

Vulnerability – I detest admitting vulnerability. Over the years I have built defenses and fortresses of walls to keep other people out. Do I have vulnerabilities? Eeeeeeeeeeeeeh, everyone does. I’m loathe to put them out there where others can easily find them and use them against me though. Because they have. So I don’t. I know where my strong points end and my weaknesses begin. That doesn’t mean I need to wear these on my sleeve. Rarely, oh so very rarely, someone will put in the effort to get close to me, really want to get to know me. Slowly, my walls begin to crumble around this person. They can now see into the darker areas of my world. I have no secrets, but there are things I don’t share right away. Every time I open up, reveal something less pleasant about myself, I wait in fear, that their entire opinion of me will shatter and change, and they’ll leave. Every revelation is a wrench to my heart. The closer someone gets to me, the greater the potential that they can hurt me.
Invalidation – Yes. This especially applies to my emotions. I am constantly questioning whether I have a right to feel the way I do when it comes to other people. Who’s to say what right I have? If the person feels otherwise about something, then my feelings aren’t justified and therefore not valid for the situation. If my feelings aren’t valid or accepted, I’m not valid or accepted. You can’t only accept parts of me, I have to be accepted as a whole. Or not at all. However this also applies to my work, my crafts, my hobbies. I do things, present things to people hoping it meets with approval but looking for criticism that will invalidate my ability, prove that yet again, what I have done, is not good enough. I don’t get defensive with criticism but having become so accustomed to it, I have a tendency to not believe people when they only give me praise with no critique.

Constantly putting myself out there for others to view and judge exposes my vulnerabilities. Opens me up to the potential criticisms of others, then when I look for those criticisms, expect them, it heightens my feelings of vulnerability because I’ve put myself at the judgment of others. Will I be accepted, or won’t I? Because I have a hard time with object constancy, I often can’t hold onto the feeling that each individual event isn’t the sole basis for a relationship/friendship. Just because something isn’t perfect doesn’t mean that people will leave me or not value me. It’s a self fulfilling cycle of hurt. Emotional masochism.
When you are constantly discredited it’s difficult to hold onto a solid sense of self. Who you are is perpetually in question. It weakens the ability to accept or even understand criticism or praise as something constructive and not necessarily judgemental. The judgement of the self is so impaired that it leaves someone with BPD open to adopting a skewed opinion of themselves based on the views of others.   When a sense of self is not solidly in place, changeable at the influence of others, this leaves a person susceptible to being wounded and hurt. Each word of praise or criticism is taken as a completely separate event, with no context to past interaction. Praise is a beautiful high. Criticism or harsh words a crushing low. This increases the need to be loved and accepted, causing someone with BPD to expose themselves even more, perpetuating a cycle of intense emotional turmoil.