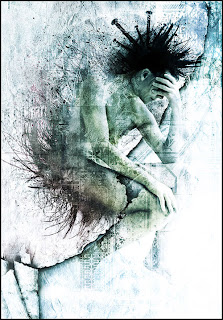 I just don’t know how to be alone some days. I know. Shut it.
I’ve been kind of a hermit lately. Off the grid sort of anti-social. I’m always around people at work and my roommate is always here in the evening so it’s not like I’m really alone. Might not be talking or anything but I still feel her presence.
My roommate is gone for the weekend. I hate being alone in the apartment for long periods of time.

I don’t always recognize how it affects me though. Or that it does in the first place. Like Thursday.
She was gone Thursday. I got home from therapy, was alternately very frustrated b/c of my therapist and increasingly hypomanic. Left alone to my own devices I make mildly irresponsible (destructive) decisions. I’ve been trying to drink less, but I mixed myself a drink and a half.  This lead to me just being more hyper and prolific. Also hungrier. I’ve been very, very good about watching what I eat, but I completely binged. Being bulimic you can imagine what followed that. I haven’t done that in many months. Everything goes so fast. From start to finish not a second to stop and think.  Roommate came home eventually and I basically hid myself away after that, didn’t say anything, but she was home and I just felt better.
Last night Roommate said she’d see me in a couple days, headed out and I went about my evening.  I went to Friends, which was only mildly uncomfortable for me. He had sort of a non-stop  need to fill the silence chatter going on which is unusual. I was mostly sleepy. I didn’t really have any great need to stay but I didn’t want to come home. I hate coming back to an empty apartment. Meh. It’s too quiet. Too empty. My room is too isolated. I can’t hear if anyone gets in our not. I pull my comforter out into the living room and crash on the couch. Ever since I was little, in high school, through college, if my brother or sister were gone for the night/weekend I always sleep in the living room where I can hear better if someone tries to get in. It’s more open and lived in. Meh. IDK. It just feels safer.
Woke up this morning. Really hard to even pull myself to a sitting position. I just wanted to stay curled up.  I went to the gym. Came back. Empty apartment. I just feel, hollow. I know I could call people and make plans, but I’m already turning inward. Day already feels too long. There’s too much time to fill and I have no thoughts for how to fill it. I just want this low level anxiety to calm down. My psychiatrist doesn’t prescribe anti-anxietals and I need a new PCP so I’m out of Xanax. Pour myself a drink instead.
I even told Friend that I didn’t think that I quit the drinking thing. I could see my fingers moving just for a reaction, any reaction, attention, but then I just got annoyed upon getting a response. Not about what the response was, just that he texted me back. I was more annoyed at myself for bothering to text him.
One drink turns into half a bottle of wine. Turns into eating to soak up the alcohol, turns into freaking out about how many calories I’ve consumed, but I’ve already fucked up this much and it’s actually easier to get rid of everything if I’m filled to capacity so I make myself everything else I want. My wine is awful (that’s what I get for listening to the lady at the liquor store), switch to Jameson while I cook so the alcohol absorbs into my bloodstream while my stomach is still relatively empty. Vodka, wine, whiskey…. Bingeing on everything I have in the apartment (which admittedly isn’t all that much), finally so full that it’s easy to get rid of everything. Release. Release  from the anxiety, my thoughts,  my loneliness, from an endless few hours of uncertainty, trying to figure out how to just get through them. The span of 3 hours from start to finish. Then sleep.
My favorite part being the residual alcohol in my blood just makes me sleepy enough to pass out at 5pm for a  2 hour nap. Sleeping is the best thing for me. Unconscious time machine. Time passing faster when my eyes are closed. Can’t be lonely when you’re not conscious.
I am not very social lately. With the exception of the first year or two when I moved to NY, I’ve never been very social, but less so than usual lately. But I haven’t really been alone, alone, too often.  This sucks so much.
Being alone is intolerable, but I don’t want to leave, don’t want to go out either. It’s just as intolerable but in a different way.  Ugh. I went to Friends last night, which was fine as far as that went. I was surrounded by a bunch of engaging people. I just don’t know. I wasn’t alone, but I didn’t feel /with/ anyone either. I always feel separate. It’s better than actually being separate though. There’s just no winning. Alone. Not alone. Still alone.
I eat. I drink. To keep myself busy.  I know before I start this shit that it’s not healthy for me, but I can’t stop myself. I just keep going, feeling more and more guilty the further in I get.  I’m sure my therapist would say this is poor impulse control. I’ve been doing this too long. I know this is bad, but it doesn’t feel bad. It feels normal, just another Saturday afternoon. That, is a problem.

I’m not even sure I can call it a relapse. Well the bulimic tendency, yes, but everything else? This is exactly what I’m working to stop, but it just seems like no matter how much work I do I still slip. I keep falling back into bad habits and screwing up. No one is perfect. I get that. I know there’s a certain amount of relapsing in the recovery process but I can’t help feeling like I’m not making any progress. Maybe I expect too much of myself. I’ve been dealing with this shit for so long, I just want it to be done. I want to feel better. At least, not crazy. I know I have to keep trying, keep working. Just because I have a couple bad days doesn’t mean everything is a wash. ::sigh:: Tomorrow is a new day. A new chance. I’ll just have to try to be better come morning.